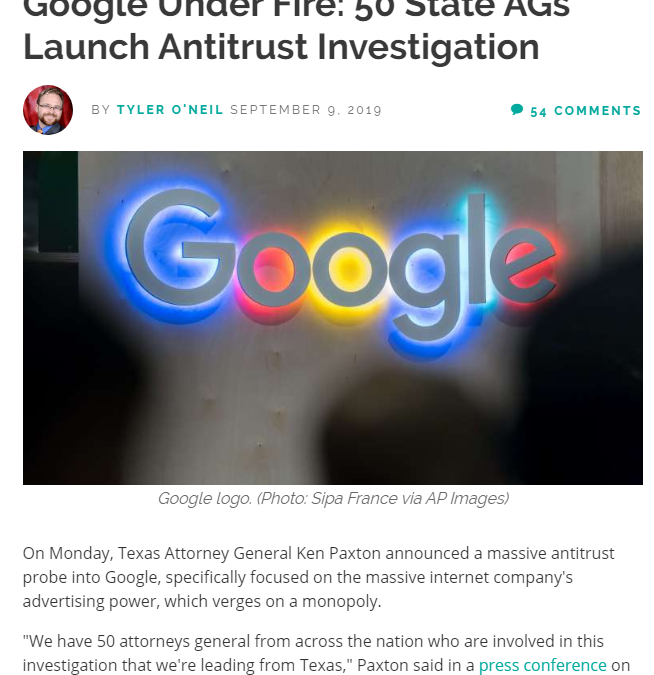 I was getting ready to post about the week it has been for Google with all their new Antitrust investigations now being filed by 50 different State Ags and being widely reported this week by the media.

“The coalition announced plans to investigate “Google’s overarching control of online advertising markets and search traffic that may have led to anticompetitive behavior that harms consumers,” Paxton announced on his website. The coalition will bring together legal experts from each state to work with federal authorities to “ensure that Americans have access to free digital markets.”

“Now, more than ever, information is power, and the most important source of information in Americans’ day-to-day lives is the internet,” Paxton said in a statement. “When most Americans think of the internet, they no doubt think of Google. There is nothing wrong with a business becoming the biggest game in town if it does so through free-market competition, but we have seen evidence that Google’s business practices may have undermined consumer choice, stifled innovation, violated users’ privacy, and put Google in control of the flow and dissemination of online information.

Then it hit me this seems strangely familiar sort of like Deja vu. So I decided it would be interesting to do a blast from the past about Google and Take a Trip down memory lane.

Look what we have here..

“The US Federal Trade commission is considering a broad antitrust investigation of Google’s search business, according to a report citing two people familiar with the matter.”

The DoJ is investigating whether Google could use its web search monopoly to hamper competition in the vertical flight search market, but it may also be asking the broader question of whether the company’s search dominance could lead to another monopoly in virtually any vertical search market.

Hmm.. I wonder if they had a crystal ball? Not too hard to see what this inaction has turned into now 8 years later.

The conclusion based on what this new antitrust probe proves is that there should have actually been in 2011 some checks and balances on the monopoly power of Google before it got to the point it is today.

We can now all only hope that the DOJ and State Attorney Generals will finally do their job to keep as Big of a company as Google is accountable.